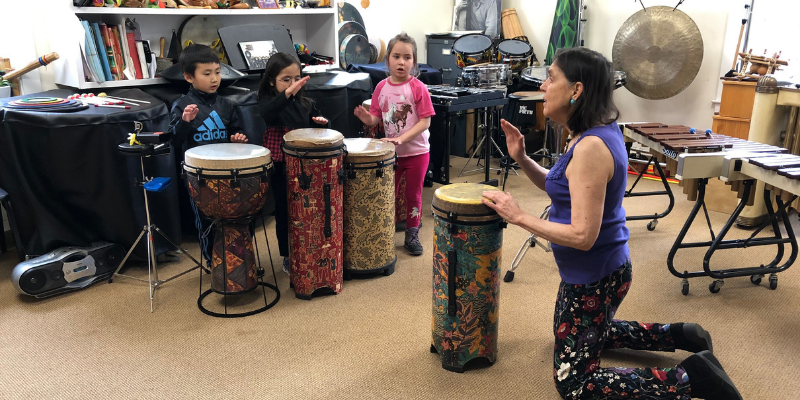 “Look outside the sky is gray.
Not a time for outdoor play.
So I’m glad you’ve come to stay
To play music here today.”

That was the cheerful song Rivers School Conservatory Marimba Ensembles Director Sarah Tenney composed and shared with the three eager students attending her Marimba Magic One class. During the 60-minute session, the three six-year-olds—Isabelle, Leo, and Laura—were rarely still as they played marimba, drums, and other instruments.

Behind the wooden slats of the marimba they gripped their mallets and concentrated their way through songs they have practiced, like “Hot Cross Buns” and “Mary Had a Little Lamb.” They sang along with the words, as well as on rhythm and solfege syllables. The songs introduce musical concepts and expose them to notation. Playing marimba also allows them to learn the keyboard, setting the foundation to learn piano in the future, and giving young string players an understanding of the steps in a scale.

Sarah worked with the students on ear training, playing patterns for them on the C Major chord and asking them to echo the patterns back playing marimba while singing the solfege syllables. “Let’s do a harder one because you are all doing really well,” Sarah told them encouragingly. “It doesn’t matter if you make a mistake,” she said. “Just do it the best you can.”

Sarah encourages her students to play equally with their right and left hands, which strengthens the under-used non-dominant hand. Laura’s mother, Kinga Tomczak, a child neurologist, appreciates how using both hands integrates both sides of the brain for further brain and coordination development.

The kids were in constant motion throughout the hour—drumming, singing, and dancing—sometimes all at once. “The class is interactive,” said Isabelle’s mother Jessica Garcia Moy. “Sarah gets them to use their whole bodies. The music is done head to toe.” When one child is playing a rhythm on the drum, the other two are using their own bodies as instruments, clapping their hands and slapping their legs. Sarah believes the movement helps children relax their analytical brains and recharge.

The biggest hit of the class was when all three children freely improvised on a black, metal, flying saucer-shaped Russian instrument called a RAV drum tuned to a G minor scale. “I like the RAV drum,” said Leo. “It sounds quiet and calm.” The students worked together to create a spontaneous resonant composition all their own. Improvisation is an important part of Marimba Magic. Sarah wants students to create their own music, just as children routinely draw original pictures.

The children went home with worksheets outlining what they will practice at home before their next class. The smiles of the kids didn’t fade as they left the classroom. “I like to play music,” said Isabelle. Kinga has enjoyed watching Laura and her classmates. “It’s amazing to see so much progress from children who didn’t know anything about music back in September,” she observed.

Marimba Magic is open to all children, ages 5 and up. Free trial classes for children between the ages of 4.5 and 7 years old are being held Saturday, May 18 at 3 pm and Monday, June 10 at 3:30 pm and 4:30 pm. Registration is required because space is limited. Email Sarah Tenney at s.tenney@rivers.org for further information.