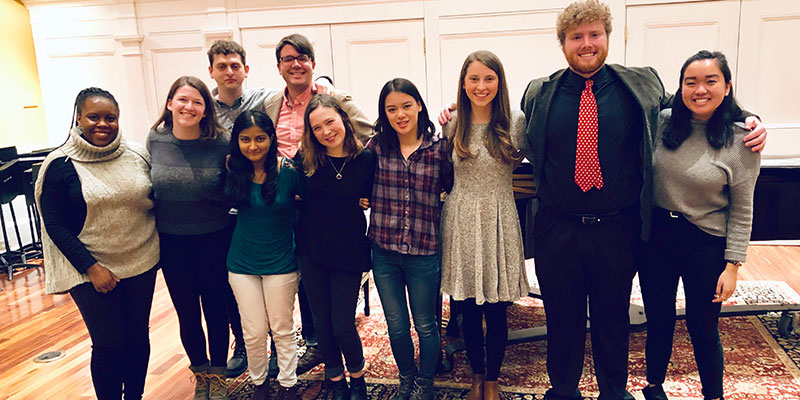 Alum Joe Nedder credits The Conservatory Program at The Rivers School with helping him make a smooth transition from high school to college. The 18-year old trombone player from Needham is a first year student at Northwestern University, where he is pursuing a dual degree in Jazz Studies and Political Science.

“Being able to take music theory in high school so naturally is helping me now,” he says. “I know a lot of friends now who were blindsided because they had never taken it in high school.” He draws on his Rivers experience of being required to learn and memorize jazz standards in his current classwork. Jazz is a natural fit for him because of how expressive he feels his instrument is. “I think trombone is the instrument that is most like a human voice. It’s so versatile and you can do so much with it.” Nedder also believes the discipline he learned as a member of the Conservatory Program is helping him with his Political Science classes as well because they require him to manage his time well and stay organized.

“Being able to take music theory in high school so naturally is helping me now. I know a lot of friends now who were blindsided because they had never taken it in high school.”

His strongest memories of Rivers Conservatory Program are of playing music with some of his closest friends. “I remember feeling like every time I walked into the Conservatory, this is my release. This is where I feel most comfortable.” The freedom he felt at the Conservatory gave him the courage to venture out of his comfort zone, like he did his senior year when he narrated a piece called “The Bell” for his contemporary music seminar. In the future, Nedder plans to continue to play music and inspire others to do the same. His advice to incoming Rivers music students is to have a positive attitude and enjoy their time at The Conservatory Program. “It’s an experience you won’t find anywhere else,” he says. “You are going to meet incredible people and play incredible music.”

For more information on the Conservatory Program, click here.