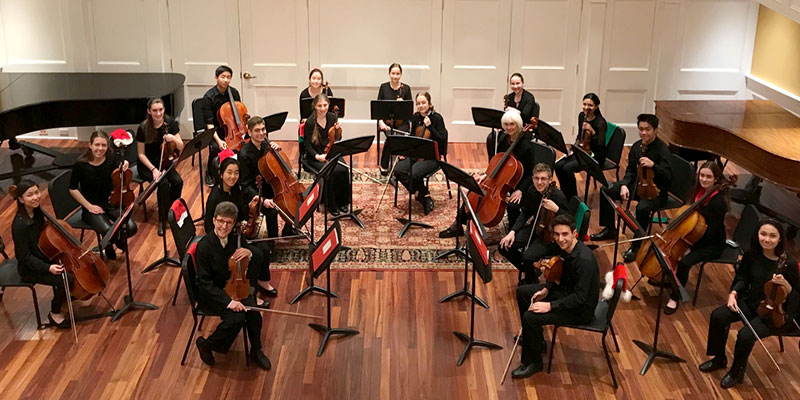 It was not only what she heard, but also what she saw that made a strong impression on Director Marta Zurad at The Rivers School Conservatory’s Camerata Strings concert on December 13. “As we were performing, I was looking around at the group, and I saw the joy of playing together,” she remembers. “They were not stressed out because they had so many notes to play, although they did. The players were looking at each other and smiling.”  Senior cellist Narek Sahakian agrees. “When we connect with each other it becomes easier to connect with the audience,” he says. At the December 13 concert, the group played a program that included a Bach Brandenburg Concerto, a Mozart Divertimento, and selections from Britten and Vivaldi.

Former RSC Director David Tierney and Marta Zurad founded Camerata Strings in September 2017 to give Rivers School Conservatory students the experience of playing an incredibly diverse, rich string repertoire, which is not often played by larger orchestras. Camerata – by its very name – reflects the small size of the group, which will always be no larger than 20 students. “I feel like in the smaller group that my voice is being heard along with the others,” says Sahakian. “All of our voices have a specific part to play so it’s a very welcoming experience.”

“I feel like in the smaller group that my voice is being heard along with the others. All of our voices have a specific part to play so it’s a very welcoming experience.”

Zurad looks for more than just ability when she selects students for Camerata Strings. “I want a musician who is interested in playing with others, rather than saying, ‘Watch me, I am the greatest,’ ” she says. Sahakian credits Zurad for setting the tone for the group through both her leadership and her playing. “She is serious about the music and always wants to have the group advance with each session,” he says. “However, she has the nicest sense of humor and brings lots of joy to the group. I leave feeling happier and with more knowledge about the music itself.”

Sahakian will be performing a Vivaldi G minor double concerto with fellow student Heather Lee in the next Camerata Strings concert. The group will also have the honor of playing with Boston Symphony Orchestra violist Michael Zaretsky and his daughter Liana Zaretsky, who teaches at The Rivers School Conservatory in addition to playing violin with both the Boston Symphony Orchestra and Boston Pops Esplanade Orchestra. That concert is scheduled for Thursday, May 16 at 7:30pm.