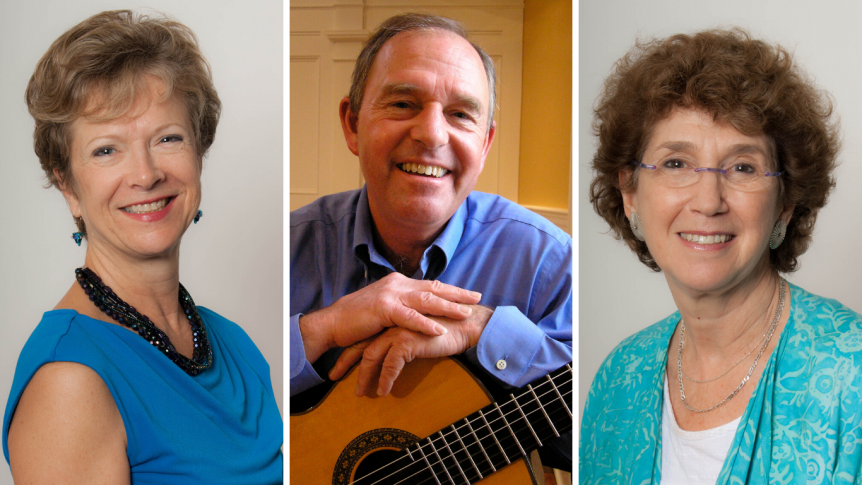 This spring, three important faculty artists will be moving on from The Rivers School Conservatory: Gillian Rogell, Robert Lasher, and Susan Emmanouilidis have given generously of themselves during their years of teaching. The Rivers School Conservatory will be forever grateful for the deep and long-lasting impact that they have had in our community.

Gillian Rogell has taught viola and chamber music at RSC for 11 years, serving as Director of Chamber Music for much of this time. In this role, she interacted with hundreds of students and developed a unified chamber music curriculum, based on her award-winning DVD, At the Heart of Chamber Music. This curriculum helped chamber music coaches to teach the same techniques of communication to students of all levels, from beginner to advanced. She says, “They were really learning the language of chamber music and the ability to connect.” Under Rogell’s leadership, students formed musical friendships by listening to one another, breathing together, and sharing in the joy of making music.

As Rogell consolidates her teaching in the Boston area, she says that she will miss sharing the excitement of learning and teaching with her colleagues, as well as the “camaraderie of the teachers” at RSC. She is grateful to have been a part of the team effort among RSC faculty to support student learning and success.

Robert Lasher has taught at RSC for 45 years — longer than any other current faculty member! He played an integral role in creating the Guitar Department and developed its first curriculum. As a classical guitar instructor and Guitar Department Chair, he is known for his kind and encouraging nature.

One of the highlights of his career at RSC has been organizing Faculty Concerts for about ten years early in the history of RSC, with the help of Margaret Tuttle. He was the stagehand and organized the receptions at these concerts. He often performed as well! He remembers, “My two children would almost always come (once reminded that there were cookies).” Another of his favorite RSC memories has been hearing students premiere his compositions at the Annual Seminar on Contemporary Music for the Young. He will be greatly missed!

Susan Emmanouilidis has been a VIP at The Rivers School and The Rivers School Conservatory for many years. She created and led the Preludio, Intermezzo, and Capriccio children’s choruses at RSC, she played a key role in designing the Conservatory Program at Rivers, she built the vocal component of the Conservatory Program to what it is today, and she served as fearless leader of the Rivers Men’s and Women’s Choruses. Her students and colleagues will miss her sparkling optimism and her warm, professional demeanor.

She has taught students important lessons, from the value of practice to the importance of listening. She has also modeled leadership skills and healthy habits for singing. For alumni who have passed through her classroom, her inspiration has lasted long beyond graduation. One alum says, “You pushed our ensembles to brave new heights, and I will be forever grateful for your teachings and your support.” As this quote suggests, Emmanouilidis has been not only an outstanding teacher but also a role model and friend to her students. Thank you for inspiring students to make their voices heard and for helping them come together in pursuit of beautiful music!