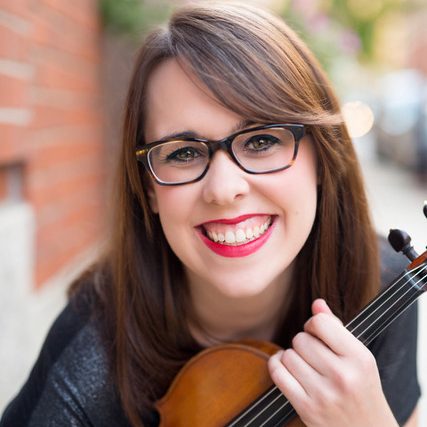 Violin, viola, ChamberMusicLab
Gabriela Diaz began her musical training at the age of five, studying piano with her mother, and the next year, violin with her father.  A childhood cancer survivor, Gabriela is committed to supporting cancer research and treatment as a musician. In 2004, she was awarded a grant from the Albert Schweitzer Foundation to organize a series of chamber music concerts in cancer units at various hospitals in Boston called the Boston Hope Ensemble. This project is now a part of her chamber music organization, Winsor Music. A fierce champion of contemporary music, Gabriela has worked closely with many significant composers, including Pierre Boulez, Frederic Rzewski, Alvin Lucier, John Zorn, Joan Tower, Roger Reynolds, Steve Reich, Tania León, and Helmut Lachenmann. Gabriela is a member of several Boston-area new music groups, including Sound Icon, Ludovico Ensemble, Boston Musica Viva and Callithumpian Consort. She also appears frequently with the International Contemporary Ensemble, Alarm Will Sound, A Far Cry, and other chamber music ensembles throughout the United States. She is a member of the Wellesley College faculty and can be heard on New World, Naxos, Centaur, BMOPSound, Mode, and Tzadik records. Gabriela’s recording of Lou Harrison’s Suite for Violin and American Gamelan was highlighted in the New York Times Article “5 Minutes That Will Make You Love Classical Music.” Gabriela is proud to be a core member of the team that created Boston Hope Music, bringing music to patients and frontline workers during the pandemic.